Why Meteorite Wedding Bands? Mens wedding bands in meteorite are the craze right now - the fad - the hot new ting and there appears to be no slowing down! None! There are many reasons for this phenomenon not the least of which is that meteorites are rare and have a higher market value than gold and not everyone has a meteorite mens wedding band! So if you have the resources you might consider investing in a meteorite band for men or women. We will discuss some of the properties of meteorites and properties of the ones we carry on our website and conclude with some pretty amazing images of the finished pieces.

Most of the wedding bands on our premier site - www.mensweddingbands.com - are collectibles featuring the Gibeon Meteorite and all of these rings are made by hand, no two are the same and all are made with unique meteorite inlay rings.

Why Gibeon meteorite? First, the facts - these meteorites fell in prehistoric times in Namibia and was named after the nearest town: Gibeon, Namibia. This term encompasses the whole meteoritic material and matter fallen from the sky during this period of time in this general area. It is therefore classified pretty much the same - as iron meteorite belonging to the chemical group IVA. These meteorites are composed of an iron-nickel alloy containing significant amounts of cobalt and phosphorus. The crystal structure of this meteorite provides a classic example of fine octahedrite and the Widmanstatten pattern is appreciated for its beauty both by collectors and designers of jewelry.

In virtually all meteorites there are small imperfections - called marks or inclusions - they are part of the meteorite's formation as they travel through space and make this material unique and valuable and authentic. Can you see why no two are alike and why your creation will truly be one of a kind!

One thing to know about buying a meteorite ring - in that it is iron-based - it can rust, particularly if exposed to acid. However, the rings we carry have a Lifetime Meteorite Ring Protection plan which means your ring is guaranteed to be protected and for a small fee you can send us your meteorite ring for re-etching and we'll do our best to make your jewelry look like new!

Want to know more about meteorite rings in general?

From a pure dictionary perspective a meteorite is a piece of iron or other composite that has fallen to earth from outer space, making its way through the earth's atmosphere without completely deteriorating! Most of the meteorites we see had their origination somewhere within what is called the "Asteroid Belt" - between Mars and Jupiter. It is assumed that a  few meteorites come from other far away areas of space and some from the Moon and possibly Mars.

Meteorites are extremely dense and because of this density they feel heavier than ordinary rocks of similar size - please see pictures below of meteorite "rocks" ...

As you can see from these images - some meteorites look entirely different than others rocks and have different weights and characteristics that make them all unique. So how do we create a meteorite ring like the ones below? Skilled artisans develop the natural look into what is called a meteorite "plate" so that the meteorite ring has a metal looking appearance and then when the protective coating is applied to prevent rust the outer surface will take on a silver-like appearance giving it a stunning and uniform meteorite appearance. 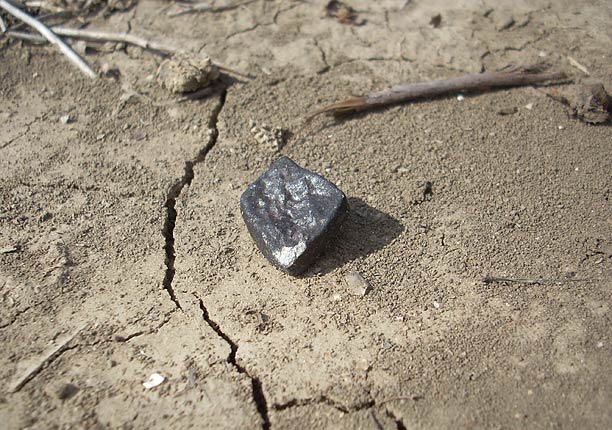 Let's take a look at what meteorite mens wedding bands look like ... 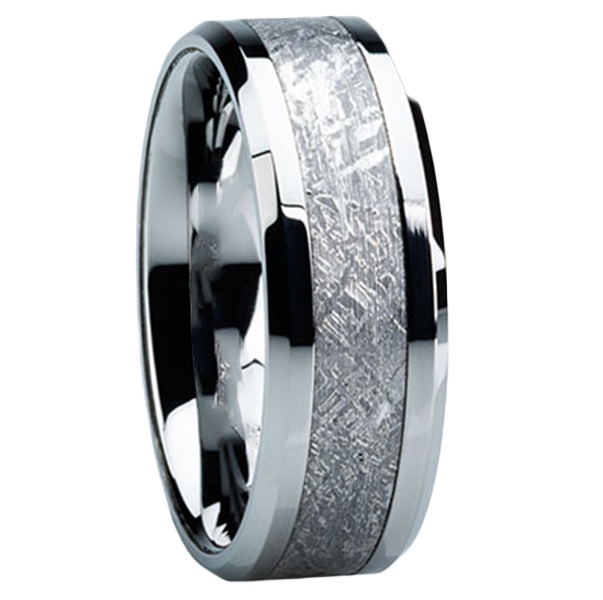 The G119M (our most popular with yellow gold) 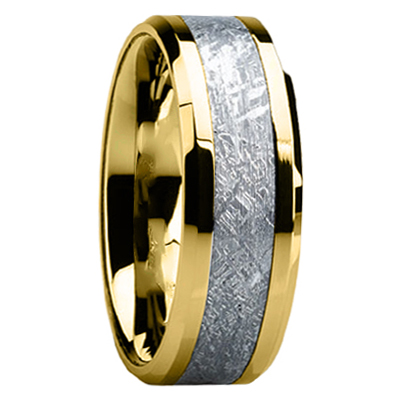